When the invention becomes the inventor: How AI finds its way into scientific discovery and innovation

The AI ​​revolution in science is helping scientists minimize the time between hypothesizing and getting results so that technological advancement can continue to accelerate and humanity can benefit more from the brightest among us.

Artificial intelligence is undoubtedly one of the most notable, if not the most remarkable the most remarkable invention that mankind has invented. The scientific community has succeeded in developing intelligent applications that can think, learn, and behave like normal people. Although these programs are currently unable to fully reproduce the full spectrum of human capabilities, they have managed to outperform humans in certain actions or tasks. For example, scientists have developed an AI that can outperform human doctors in accurately detecting skin cancer in patients at a very early stage, potentially saving thousands of lives each year. Specialized AI applications are also becoming increasingly adept at thinking like humans and even developing unconventional ideas, as demonstrated by an AI winning a game of Go – a game that requires strategy and intuitive judgment – against the world champion. The AI ​​reportedly used unconventional moves and strategies – some of which were not even used by humans – to outsmart its opponent in this case. This shows the ability of modern AI to not only think and calculate accurately, but also to show an occasional touch of creativity. This newly discovered ability for AI to be creative and analytical at the same time ushered in the era of the AI ​​revolution in science and technology. As mankind’s greatest creation, AI has evolved enough to help humans make new breakthroughs in science and invent new technological applications.

The drudgery associated with scientific discovery

When we think of scientific discoveries or technological inventions, we often imagine scientists having sudden aha moments when they discover a fact or come up with an innovative solution that has an impact on the world. But to arrive at these revelations, scientists have to go through years and decades of scientific research that involves extensive study, research, analysis, calculation, and experimentation. Some discoveries require the combined effort of several scientists from different fields, and often several generations, to achieve the smallest breakthrough. For every fascinating breakthrough we see in the news and magazines, there are dozens of scientists working in silence, collecting data, analyzing, verifying, peer review, reviewing their peers’ results, and performing meticulous routines towards the slightest progress a new discovery or invention. These researchers often have to meet deadlines to submit results, which complicates the process as failure to meet deadlines can lead to funding being withdrawn.

Big data is already proving to be a great tool for scientists today, as it enables them to analyze large amounts of data quickly, speed up experiments and the entire research and development process. However, the scientific community leaves much more to be desired to further expedite the process of information gathering and analysis and to shorten the time between hypothesis formation and validation. The dawn of the AI ​​revolution in science that we are currently witnessing is about to revolutionize the world of innovation, giving the scientific community what it needs and possibly more.

The Impact of the AI ​​Revolution on Science

The combined use of AI and big data to collect and analyze huge amounts of data enables scientists to reach conclusions faster than before. AI is able to perform highly complex calculations with high accuracy and speed and helps in various research areas such as astrophysics, mathematics and computer science. AI also helps accelerate scientific discovery in other ways: 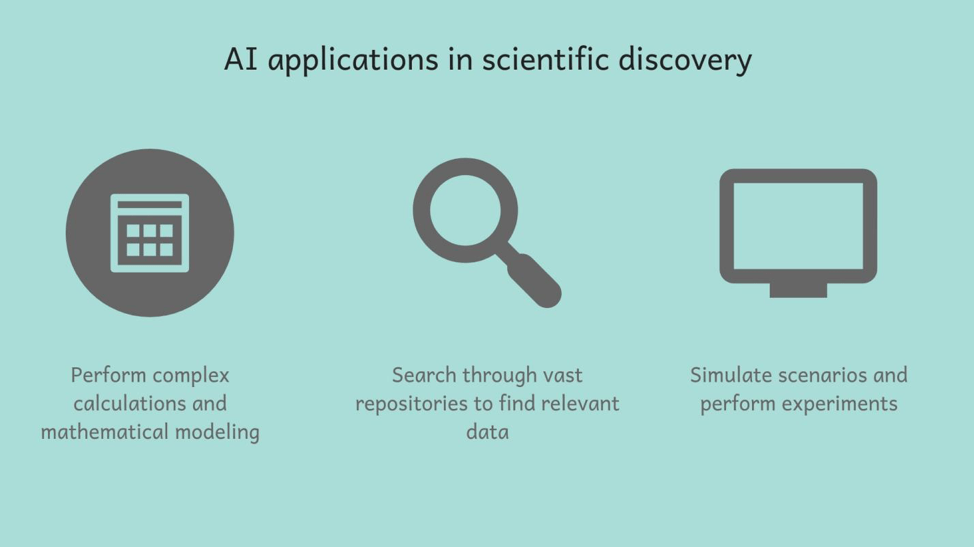 Deep learning is a relatively new subset of artificial intelligence that is used, among other things, to understand highly unstructured data. This ability of deep learning to identify hidden patterns in large amounts of data is used in biological studies to research genomics and in medicine to predict the molecular structures of effective therapeutic agents in drug discovery. This saves a lot of time which, if done manually, is spent in hundreds of studies and trying out different molecular structures for drugs.

Simulating conditions to test different hypotheses to understand how new systems or new products work under different conditions. These tests can accelerate the discovery of new materials or the development of a new product. Conventional testing of new product designs would require a functional unit of the product to be created and examined under test conditions, which would cost a lot of time and money. Simulations can also be used to recreate systems that are too big or too small for humans to study. For example, AI can be used to study materials at the molecular or atomic level, to observe the interactions between these particles and to understand intermolecular dynamics. This is made possible by programming the established physical laws and the known behavior of the individual molecules into the simulation. The system simulates the interactions between different compounds according to the laws of nature under different conditions that would otherwise be difficult to reproduce in the real world. This enables scientists to conduct all sorts of “what-if” experiments and test a wide variety of hypotheses. Similarly, using AI, scientists can also simulate large planetary bodies and their movements along with the laws of space to solve the greatest astronomical mysteries such as discovering hidden planets and other celestial bodies.

Another futuristic application of AI in scientific discovery is to enable the exploration of places that humans cannot access. For example, space exploration is a long and arduous process for astronauts and only requires heavy equipment to maintain and requires a lot of time to train and prepare. To speed up space exploration, we can program robots to venture into harsh regions of space with just a sturdy body and carry much more equipment for collecting and analyzing data than a human astronaut can send. This can allow for more extensive research on different planets and eliminate the risk to human life in the event of an accident. Similar applications can be used to explore places on earth with harsh conditions such as the depths of the oceans.

Scientists are special people who are not only the brightest among us, but also those who have devoted their entire lives to advancing human progress and improving our understanding of the world around us. You are responsible for constantly pushing the boundaries of human knowledge and capabilities to ensure we have a better future. The AI ​​revolution in science will catalyze humanity’s collective efforts to understand the world around us and develop technological tools to improve our lives.