The 2021 ACM Gordon Bell Special Prize for High Performance Computing was awarded to a team of six from Japan for a novel aerosol simulation methodology that investigates how COVID-19 could spread from person to person via aerosolized droplets.

In April 2020, in response to the global spread of COVID-19, the Japanese government made Fugaku, the world’s fastest supercomputer, available to scientists working to fight the epidemic. Building on existing industrial particle modeling software, the Japanese research team Kazuto Ando, ​​Rahul Bale, Chunggang Li, Satoshi Matsuoka, Keiji Onishi, and Makoto Tsubokura, all connected to the RIKEN Center for Computational Science, used Fugaku to perform a variety of simulations of how COVID-19 could spread from person to person via aerosolized droplets.

In the newspaper Digital transformation of the risk assessment of droplet / aerosol infections implemented on “Fugaku” in the fight against COVID-19 the team notes:

Our work can best be summarized as a contribution to the mitigation of COVID-19 transmission by supercomputers from three perspectives: performance, since the scalability and efficiency of the entire machine as well as an acceleration of orders of magnitude in the generation of digital twin meshes have been achieved, technology, since this is the result of the new CFD method combined with the application-centric HPC design of Fugaku / A64FX and the scientific and societal impact in achieving a transformative epidemiological simulation of droplets / aerosols and influenced the behavior of the entire Japanese society to contain COVID -19 pandemic.

This is the second time an ACM Gordon Bell Special Prize has been awarded to recognize outstanding research into understanding the COVID-19 pandemic through the use of high performance computing. The 2020 award went to a team led by computational chemist Rommie Amero of the University of California San Diego and Arvind Ramanathan, a computational biologist at Argonne National Laboratory, for their work on modeling an all-atom SARS-CoV-2 virus and understanding the virus’ spike protein, how it behaves and gains access to human cells. Described as the first achievement of its kind, the team developed an artificial intelligence (AI) -based workflow to simulate the spike more efficiently and scaled the workflow onto the Summit supercomputer at Oak Ridge National Laboratory for deeper understanding to gain access to the spike mechanisms and speed up the search for therapeutics or vaccines that could weaken the virus.

Now, Amaro, along with a 52-strong team of partners from the US and around the world, including Oak Ridge National Laboratory, has modeled the Delta virus in an aerosol for the first time, again using Summit to simulate the models . Summit is one of the few supercomputers in the world that can run these large-scale simulations that allowed researchers to see aerosols with an unprecedented billion atoms. Amaro’s research that was a finalist for this year’s ACM Gordon Bell Prize, and here is her presentation for this year’s SC21 supercomputing conference.

Our work dramatically expands the capabilities of multiscale computed microscopy to fill the significant gaps in current experimental methods that are limited in their ability to study aerosols at the atomic / molecular level and thus obscure our understanding of airborne transmission. We demonstrate how our integrated data-driven platform offers a new way of researching the composition, structure and dynamics of aerosols and aerosolized viruses while driving the development of simulation methods along several important axes. We present a number of first scientific discoveries for the SARS-CoV-2-Delta variant and note that the full scientific impact of this work has not yet been realized.

The impact of this work goes beyond the immediate need to learn as much as possible about how SARS-CoV-2 works to show that computer modeling of aerosols can have far-reaching effects, including climate science and human health.

According to Dr. Robert “Chip” Schooley, Professor in the Department of Medicine, UC San Diego School of Medicine:

“What we learned during the pandemic is that aerosols were one of the main drivers in the spread of the virus and that their role in the transmission of many other respiratory pathogens has been systematically underestimated. The more we learn about aerosols and how they harbor viruses and pollutants such as soot that have negative health effects, the better able we are to develop effective treatment and mitigation measures. This benefits public health and the well-being of people around the world. “ 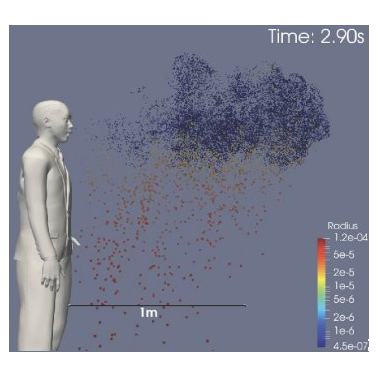